This is Baudouin de Lannoy, called le Bègue, the stutterer. He is lord of Molembais. He is a member of the prestigious knight's order of the Golden Fleece. A man of great status. The Burgundian Duke Philip the Good established the order in 1430 in Bruges, during the festival for his marriage to Isabella of Portugal. With the order, he seeks to enlarge his influence. 24 chosen knights from the highest elite are members. Later it becomes more. The order still exists today. Amongst others, this Baudouin de Lannoy is thus one of the first knights of the realm. Jan van Eyck portraits him with his proud necklace of the Order, a product of a Bruges goldsmith. De Lannoy's high hat further displays his standing. The painting of such rather detached portraits of prominent people belongs to Van Eyck's charge as court painter. This portrait is, moreover, the only one that remains preserved. We know that Van Eyck and De Lannoy travel together to Portugal, with Philip's wedding in mind. The Lannoy's portrait is only just been restored: the knight shines again. The portrait next to this is world-renowned. Yet who the wealthy man is with the blue chaperon, we do not know. Again, presumably Van Eyck reveals a modern, beautiful portrait ahead of his time: realistic and living, in three-quarter profile, with lighting effects. And, with an illusion: look how the hands of the man enter into our space. He shows us his ring: is this an engagement portrait? 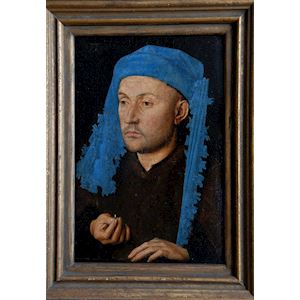