6 May 1432. In Saint John's Church of Ghent, now Saint Bavo's Cathedral, the chapel of Joos Vijd and his wife Elisabeth Borluut is consecrated. The childless couple pray for that here, both kneeling. It is as if they are still alive. They are the patrons of the Ghent Altarpiece, and can be seen when the Altarpiece is closed. Vijd and Borluut illustrate a new phenomenon in Van Eyck's 15th century: portraits of the social elite, no longer only of royalty and members of the nobility. The rendering of their faces is also new: in three-quarter profile or frontal. That has never been seen and becomes the benchmark in Europe. Even Leonardo da Vinci and his Mona Lisa are in debt to Van Eyck... Joos Vijd and Elisabeth Borluut belong to the wealthy elite. You see that in their clothing: his red garment is trimmed with fur, her outfit has a damask lining. Look also at what you can call Van Eyck's 'dermatological accuracy'. Complete with wrinkles and warts. On the same 6th of May, 1432 the second son of Philip the Good is baptised in Saint John's church. That is no coincidence: Joos Vijd plays a prominent political role in Ghent, as does the Borluut family, and he no doubt has excellent contacts with Philip. The childless Vijd family lineage dies along with him. Amongst other reasons, that is why the Ghent Altarpiece is made: in order to remind us of Joos Vijd and Elisabeth Borluut. As a sort of monument through the ages. Is it so monumental in size because of that? Perhaps. 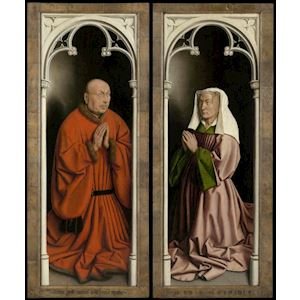