We find ourselves again with the Ghent Altarpiece and its exterior panels, the heart of the exhibition. Looking left you see the older John the Baptist, to the right the young John the Evangelist. In the New Testament John the Baptist announces the arrival of Christ and baptises him -- hence his name. John the Evangelist describes, amongst other things, in his gospel what Van Eyck depicts in image on the interior panels of the Altarpiece: the adoration of ... the Mystic Lamb. The chalice with the adders refers to his martyrdom. Do these two figures also make you think of works of sculpture? And thus, of three dimensions? Van Eyck creates that effect with painted sculptures that are really made from white stone as it were and by the ingenious lighting in their niche. That is once again part of his optical revolution. The debate between painters and sculptors was alive and well in his time, with the crucial question being: which of the two arts reproduces reality the best? These two magnificent figures are a sort of answer by Jan van Eyck. He frequently paints figures that give the impression of being sculptures. He thus is clearly inspired by the art of sculpture. And, we know from documents as well that he paints and guilds life-size stone images, a very labour-intensive job. Presumably Van Eyck also even designs sculptures himself. He and his studio carry out yet other projects for Duke Philip the Good, such as interior decorations, costume designs, adorning banquets... Unfortunately, nothing of this has survived. 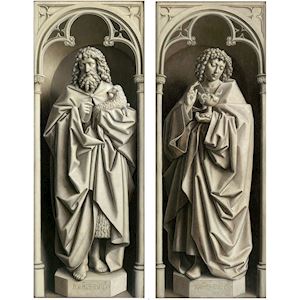