Does Jan van Eyck make miniatures? We don't know for sure, but you saw here already extensively how he creates majestic spatial effects in minimal space. Such as miniaturists do... This is a page from the Turin-Milan Book of Hours. It is called that because parts were found previously both in Turin and Milan. The illuminated manuscript is the most prestigious from the Burgundian Netherlands. It was certainly partially made there. By whom, we do not know. We do know that the maker of a few miniatures from the book is very familiar with the work of Van Eyck. Or...is Jan van Eyck himself the maker? Look for a moment below, at Christ's baptism in the Jordan, by John the Baptist. It is a realistic mini-world landscape, that you could look at forever: the clouds, the moon, the rocks, the flora and the fauna, the figures, the reflections in the water, the little waves, the flying swallows (we presume), the atmospheric perspective with first brown, then green, and then finally a blue-grey horizon... As one of the first artists, Van Eyck also paints the moon true to nature. Above the landscape we go inside. In the presentation of interiors with the accompanying perspectival effects Jan van Eyck is equally masterful, as we know. John the Baptist is newly born in the magnificent four-poster bed, in an interior that looks suspiciously 15th century. Notice the many details and admire the realism, which is at the same time an illusion. John lived around the year 1, in Christ's time. 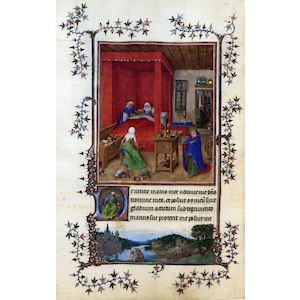