Gerard David and Jan Gossaert: they are the creators of this diptych, three generations after Van Eyck. We have arrived at about the year 1500. The influence of Van Eyck remains visibly high as always: this Mary with child in a splendidly executed church interior again is inspired by him. The left panel is by Gerard David, Bruges's most successful painter around 1500. He makes his own version: it is larger than Van Eyck's example. That one hangs in Berlin and is too fragile to travel to Ghent. David brings in still other adaptations, such as Mary's downward, melancholic gaze. In one respect, he is inferior to Jan van Eyck: the light effects are less virtuous. To the right the patron of the project is kneeling before Mary. We know his name: Antonio Siciliano, chamberlain for the Duke of Milan. Saint Anthony, his patron saint, accompanies him. Painter Jan Gossaert stepped in for these two figures and presumably Simon Bening, painter and miniaturist, took care of the luxuriant landscape. With the presentation of Mary with child, Jan van Eyck becomes the paradigm. In this gallery you will discover still more examples of this. 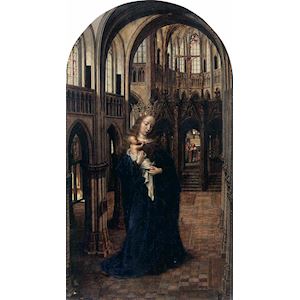