This is the most important scene of the Ghent Altarpiece when it's closed: the angel Gabriel brings Mary a joyful message: she will be the mother of Jesus! The lily is a Christian symbol of purity. Notice how Mary's answer is painted upside down, to be read from the heavens: 'She is the servant girl of the Lord,' she says in Latin. The scene is situated in a bourgeois interior. Look at the light, one of Van Eyck's major innovations. The first light source comes from the window openings in the back. However, there is also light coming in to the right of Mary. This is ingeniously thought out because it corresponds to the actual light in the place where the Ghent Altarpiece hung. The frames of the panels also cast their shadow on the floor. It is as if light streams into Mary's interior from our space. Van Eyck plays with that genial intertwining of two realities. Playing with light and shadow is essential for the painter. It gives form and creates a three-dimensional illusion on a flat surface. Look, for example, also at the pleats in the clothing. Finally, take a look through the window, towards the city. There we have a view of depth. At the same time we see from below a softly rising tiled floor. The two points of view do not come together in reality, and yet the image is coherent. That intuitive perspective is also part of Van Eyck's optical revolution. Jan van Eyck guides our gaze, like a true director. 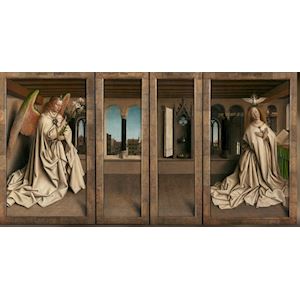