"I still remember very well that I had seen a portrait of a woman by him, with a small landscape in the background that was barely depicted, and yet was very nicely and well painted." Karel van Mander, 1604 Presumably Van Mander was talking about this unbelievably detailed little panel by Jan van Eyck of Saint Barbara. Against her father's wishes, Barbara became a Christian: she is leafing through a prayer-book and holding a martyr's palm. In the background the gothic tower in which her father will lock her up is still under construction. No wonder, then, that Barbara is the patron saint of architects... Once you start looking, you keep on looking. Van Eyck paints from an elevated perspective. As such, he evokes a feeling of expanse on a petite little panel. Without colours. The blue light is a later addition and the ochre is a discolouring. Experts continue to discuss this work: is it an under-painting, as Karel van Mander suggests? Is it the first layer of what would become a painting? Or, is it a completed drawing? Given that Jan van Eyck uses an oaken, and thus expensive, panel, we would assume that this is indeed a painting. Jan van Eyck is the first artist from the Southern Netherlands to sign many paintings. On this one we read in Latin: "Jan van Eyck made me in 1437." This bears witness to an increasing self-awareness amongst artists. They are no longer anonymous. 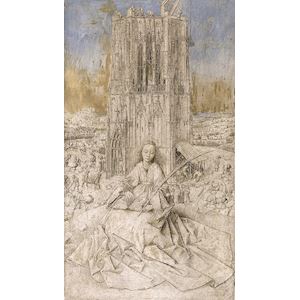