A man is sitting in a study, reading or studying. Judging from his clothing he must be a Cardinal. Behind him lie disorderly placed books and in front of his desk a lion is resting. The combination makes it clear who this is: Saint Hieronymus, church father, bible translator, scholar. According to the legend, Hieronymus once relieved a lion of a painful thorn in its paw. Hieronymus lived before and after the year 400 CE, but the space in which the studio of Van Eyck places him is wholly 15th century in design. Typical for Van Eyck is how he enhances the illusion by adding a sort of still life, with objects from his time: notice the hourglass and the scientific instruments. Van Eyck sets the example with this presentation of Hieronymus. Major Italian painters such as Ghirlandaio and Botticelli shall be inspired by it. We often see this combination of fragments from reality and from the imagination in Van Eycks work, as for instance in the combination of recognisable buildings and imaged constructions on the Ghent Altarpiece. 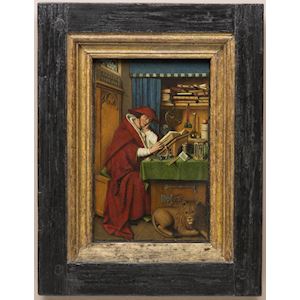