In the years 1420-1430, a new art of painting originates in the Netherlands, specifically in the cities of Bruges, Ghent as well as Tournai, with Jan van Eyck in the definitive main role. That much you know already. The art of painting in and around Florence is also fundamentally renewing itself in this period. This panel with its life-like figures bears witness to the Italian revolution: it is by the hand of Fra Angelico, Dominican monk and painter. We are looking at three wonderful scenes from the life of Saint Nicholas of Bari. To the left, the newly born saint can already stand upright, in the middle, Nicholas receives his calling and to the right he is tossing coins through a window in order to save the three daughters of a poor father from forced prostitution. You see Fra Angelico experimenting with a mathematically correct perspective, an important innovation in Italian painting of his time. The goal is that all so-called vanishing lines converge into a single point. This differs from Van Eyck, who worked with an intuitive perspective. The paint that Fra Angelico works with is, by contrast, traditional. It is called tempera, made from pigments mixed with egg whites and water. Only three generations after Fra Angelico and Van Eyck would oil painting also break through in Italy. 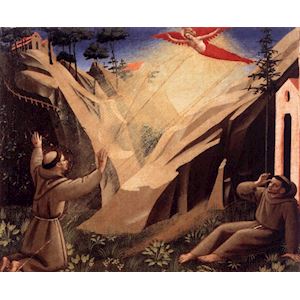