“When the three women entered the tomb, they saw a young man sitting at the right, clothed in white. They were horribly shocked. But, he said to them ‘Fear not. You are seeking Jesus, the man from Nazareth who was crucified. He has risen from the dead, he is not here.” End quote. It is this scene from the Gospels which we see here: a rocky setting shows the empty tomb of Jesus with the stone lying aside. Christ has just risen from his tomb! The three guards are sleeping and the three surprised women each have a vase with balsam with them. The white angel speaks to them. Look at the guards: one is wearing a medieval chain-mail and his two colleagues are sporting some sort of pointed, oriental hats. In the background we see Jerusalem, with the Dome of the Rock and the Holy Temple, in combination with the Flemish-looking architecture. The whole scene is thus fictitious, but appears to be real. A panel such as this strengthens the suspicion that Jan van Eyck travelled to Jerusalem upon the orders of Philip the Good. We see the Dome of the Rock and the Holy Temple also in other works by him or his studio. If this painting makes you think of the Ghent Altarpiece, you would be correct. Just as in that work, we see figures in a landscape, as is always the case with Van Eyck. However, the style and the execution are less precise here. This is why experts view this panel as a product of Van Eyck’s studio, and not by the Master himself. 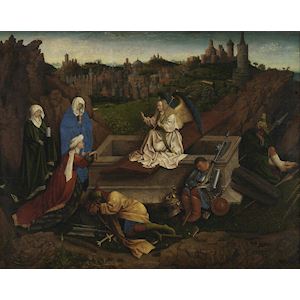