Jan van Eyck spends his golden years in Bruges, but he paints the Ghent Altarpiece around 1430 for a couple from this city: Ghent. We shall meet them in a little while. Urban centres such as Bruges and Ghent play a primary role in the Low Countries during Van Eyck’s time: politically, economically and culturally. This is the oldest comprehensive city-view of Ghent. You can see on this detailed map the Ghent streets, squares, major buildings, ships, working people… The map dates from 1534, roughly one century after the unveiling of the Ghent Altarpiece. This is still the Ghent of Jan van Eyck: the largest industrial city of Medieval Europe. It is an important political centre, with a large wealthy elite. It is the maritime hub in the Southern Low Countries. At the time, Ghent has 60.000 inhabitants. That is quite a lot for a medieval city. Artists' crafts are flourishing in Ghent, as well as the guilds and crafts in general: approximately half of the population in medieval Ghent is a member of a guild! Guilds provide for the training of young craftsmen. They take care of members in need and they are responsible for their experience of faith. They protect the interests of their members and regulate the market, along with the governing authorities. They are also responsible for quality control. As court painter, Jan van Eyck is not a member of a guild. But he does learn his trade, has many colleagues and friends, and works closely with the prominent guild members, certainly in Bruges. The Burgundian court, the cities, the guilds: they are all tightly connected. Indeed, they are not separate worlds at all. 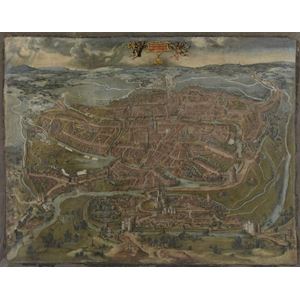