Welcome to the world of Jan van Eyck! He lives in the first half of the 15th century. The economy is booming in cities such as Ghent and Bruges, but also elsewhere. There is a high demand for luxury goods, amongst other things: gold and silver jewellery, manuscripts with colourful miniatures, sculptures, expensive textiles, paintings on panels. And, enormous wall tapestries, such as this example from Tournai. Unfortunately, we do not know who made it. You are looking at a heavily populated scene, with from left to right the sufferings of Jesus, his death on the cross and his resurrection two days later. That is the core of Christian belief. Van Eyck also depicts this scene. We shall return to this later. Wall tapestries in precious materials are extremely expensive. Their production is vastly more labour intensive than with painting. They provide a feeling of warmth in the chilly spaces of palaces and courts. But most of all, wall tapestries exude a sense of high sophistication. Those holding great power such as the Burgundian Duke, Philip the Good, enjoy flaunting this luxury art in their courts. High-status courtiers and nobles follow suit. They follow the princely example and try to outdo each other. This atmosphere of competition drives the artistic boom. Jan van Eyck is the court painter of Philip the Good, who admires and trusts him greatly. The archival documents in this hall reveal this. They bring us much closer to Jan van Eyck. You will hear more about his life when you press the button with the letter A. We will offer you similar in-depth commentary a few times, primarily at the beginning of the tour. 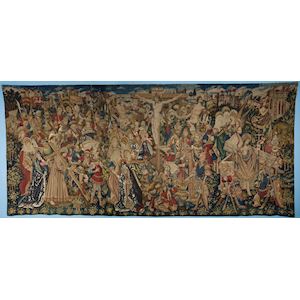