The United States only entered the war on 6th April 1917 and the American Expeditionary Force only arrived about halfway through 1918 during the final offensive, seeing action south of Ypres. At the end of August and the start of September 1918, the 27th and 30th division advanced between Kemmel and Ypres. The offensives claimed 2,100 casualties. From the end of October 1918, two other American divisions, the 37th Division and the 91st Division, fought a tough battle between the Lys and the Scheldt. The bodies of American soldiers who fell in Flanders during World War I were often repatriated. Those who remained on the setting are mostly buried in Flanders Field Cemetery in Waregem. Besides the military commitment, the USA also provided assistance to the destitute population. The Commission for Relief in Belgium was established in January 1915 by Herbert Hoover ,who became President of the United States afterwards. Until December 1918, it shipped as much as 3.2 million tons of food to Belgium. Other American aid organizations such as the American Red Cross were also in active service in Flanders. 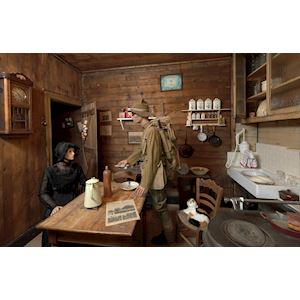