You are now in a British connecting trench, which connects the first battle line with the second and third trench line. This trench is made of A-frames, wooden frames shaped as a reversed letter A. You can see it in the drawings on the panel. The wall in corrugated material and the duckboards on the ground are also typical for a British trench. The elements of the trenches are almost identical, because everything is made behind the front. The British empire does not suffer from a lack of base materials thanks to its colonies and its dominating position at sea. For example, you've noticed the Brits frequently use burlap. These prefabricated elements allow for a quick and sturdy construction. 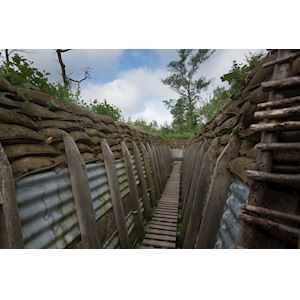