Trenches have been used for centuries. They offer protection when you're under siege and help to safely approach the enemy's position. When at the end of 1914 the front is deadlocked, the armies dig themselves in. First in smaller holes and short stretches of trenches, but in the next years it became a network of trenches with shelters, depots, first aid posts and dugouts. You are now inside a German trench, easily recognizable by the bench, the elevated area that soldiers use to shoot over the parapet. The parados ensures that the shooting soldier's silhouette cannot be seen from a distance. Have a look through the loopholes: they seem to offer a safe view of the battlefield, but that's a mistake. On the contrary, it is very dangerous because enemy snipers keep an eye on those small openings. As the war progresses, the Germans build more simplified trenches. They do so because they struggle with a shortage of building materials. 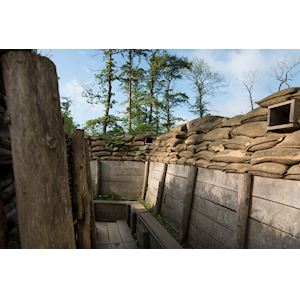