Even in ancient times, communication has always been crucial in a war. Sharing information on the battlefield was often a decisive factor for the development of the battle. During the First World War, technological progress causes a change in the way communication works. At the start of the war, troops still used visual communication tools such as flags and light signals. Light signals are given with a heliograph. It's a type of mirror that reflects the sunlight, signalling in Morse. But quickly, telegraph and telephone take over this role and by the end of the war the soldiers also use radios. But when the conditions in the field are adverse or technology fails, the army command falls back on classic tools such as pigeons and dogs. Notice the stuffed pigeon. It has an aluminium cylinder attached to its paw, which can contain a message. 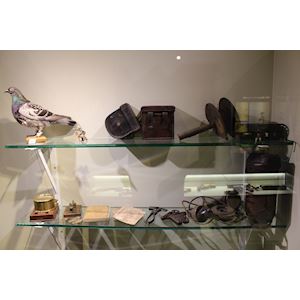