Symbolically, the exhibition on Germany is located opposite the exhibition on the allied forces. Germany consists of many states and the decorations on the German spiked helmets refer to the state the soldier comes from: the eagle refers to the state of Prussia, the star refers to Saxony. From 1916 onwards, the German uniform is transformed drastically. The spiked helmets were originally meant to protect against sabre attacks. But in the trenches a steel helmet is more useful. In 1916, the Germans introduce the Sappenpanzer or cuirass. It is somewhat similar to a medieval harness. It is made of steel and weighs between 9 and 15 kilograms. It can stop bullets fired from a 300-meter range. As an extra protection a thick steel plate, weighing almost 4 kilos, is added onto the helmet. The complete outfit is extremely heavy and impossible to fight with. It is only used to stand guard. 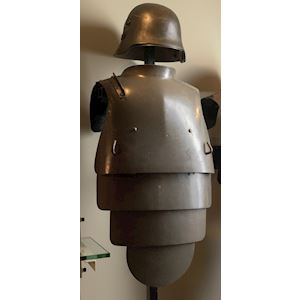