The use of airplanes also evolves tremendously during the First World War. In 1917 air warfare thrives. April 1917 is known as Bloody April because the British air corps loses around 150 planes and 200 soldiers. At the end of July 1917, one of the largest air battles of the war takes place over Zonnebeke. Almost 100 airplanes are involved in it. The black and white propeller belongs to a British Sopwith Camel, one of most frequently used war planes. On the ceiling you'll find a scale model of this airplane, you can recognize it by its round nose. 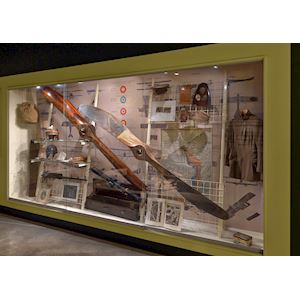