In this display cabinet you see an example of how the First World War is the transition period between primitive and modern warfare. Soldiers often carry clubs with them that feel very medieval and come in handy in man-to-man fights. Stabbing weapons such as daggers and knives are also still being used. In the Battle of Passchendaele, the German bunkers are taken one by one in man-to-man fights. Besides rifles and hand grenades, stabbing weapons come in handy in such cases. Thanks to the development and the evolution of ammunition, automatic weapons also improve. Several manufacturers build machine guns that can fire up to 600 bullets per minute, over increasingly larger distances. That makes the war more anonymous, more clinical and more mechanical. Machine guns are sometimes given imaginative names such as the devil’s paintbrush. 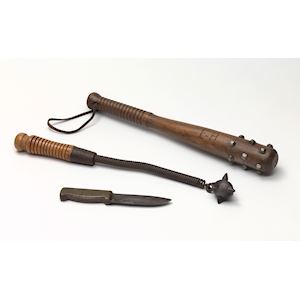