Australians are also subjects of the British empire and thus fight alongside the Brits. Together with New Zealand soldiers they make up the ANZAC, the Australian and New Zealand Army Corps. In France, they take part in the Battle of the Somme in 1916. And in 1917 they are fighting here, in the Battle of Passchendaele. These three round bronze commemorative plaques are exceptionally available for viewing here. They were originally given to the Australian family Seabrook. The plaques commemorate the sad death of three brothers from the same family. All three were killed on their first day at the front. Theo, George and William Seabrook. Notice that on many of the wooden commemorative plaques you will see identical last names. The story of the Seabrook family is unfortunately bitter reality for many families: often brothers fight side by side, often they are killed in battle and parents lose their sons. 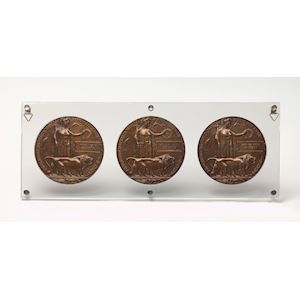