WW1 is the first real world war in history. Soldiers from around the globe join in the battle that is being fought in Western Europe. All nations taking part in the Battle of Passchendaele have their own space here. For example, the Scots. The tartans, the colourful patterns in their kilts, refer to the clan and the regiment the soldier belongs to. Oddly enough, all kilts have sown-on buttons to attach braces. Mud and water make the kilt so heavy that it would drop down without them. That's why the kilt is often protected with a type of cotton khaki apron. In the 20th century, the British empire also stretches out overseas: troops from New Zealand, Australia, Canada, British India and South Africa come to fight for their motherland Great Britain. The clearly recognizable remains that you can see in the high cabinet around the corner, are recent finds. They are possessions of South African soldiers whose bodies were found in 2011, close-by in the Zonnebeke brickyard. In 2013, they were buried at Tyne Cot Cemetery, the largest Commonwealth war cemetery in the world. This cemetery is walking distance from the museum. 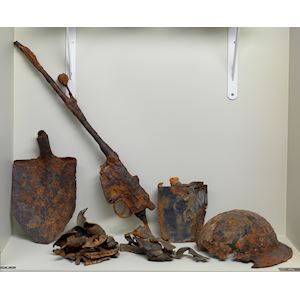