The Third Battle of Ypres starts with artillery bombardments that last two weeks. Over 4 million projectiles are launched. Their impact leaves the environment as one huge pile of rubble. After a downpour, the landscape changes into an impenetrable swamp, because all the drainage has been shot to pieces. The grenade on the far right is a British 12 inch. This grenade weighs almost 750 kg when it's filled and it was found in a clay pit in Zonnebeke. In the middle of the room you see a 150mm Krupp Kanon that belongs to the German army. It needs a team of six men to work it and can shoot four grenades per minute. It has a firing range of about 8 kilometres, which is almost equivalent to the terrain that is taken in the Third Battle of Ypres. 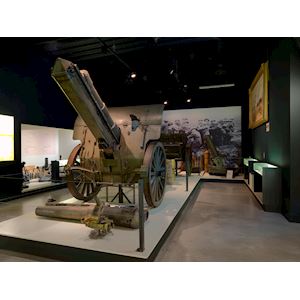