The Great War is near its end. During the final offensive, Belgian soldiers play a big role. At the end of September 1918, they liberate both Passchendaele and Zonnebeke, under the command of King Albert I, together with French and British troops. The drawback was that one third of all Belgian soldiers killed in action during WW1 were killed in this final offensive. On November 11, 1918, there is finally an armistice: The First World War is over. Here we see possessions of Hector ‘Torten’ Goetinck, who was a professional football player even before the war. During the war, he is part of the Front Wanderers, a sort of national squad of the Belgian army. Torten is captain of the team and when he is not on duty, he travels to several allied countries to play football with his team. Torten loses many team mates in the war, but he himself manages to survive. He remains a famed football player and is the trainer of Club Brugge when they grab their first national championship. In 1930, he is the national coach of the Belgian Red Devils at their very first World Cup, and he is also the very first national coach of Belgian origin. Torten’s life eventually does end tragically, when he is killed at his home in Heist during a bomb attack in the Second World War. 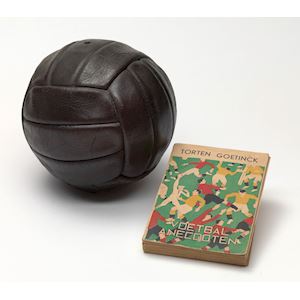