While hundreds of thousands of men are at the front, just as many women are left behind at home. The First World War is also a very determining time for them. While their men are absent, the women take up important roles: working the land, working in factories or working as train guards. Or they help out as nurses in the many hospitals or end up in the less fortunate role of prostitute. The syringe in the wall cabinet is used to treat an unpleasant side-effect of prostitution: gonorrhoea. In Germany, the First World War leads to women getting the right to vote after the war. The pamphlet in the cabinet that calls for “Frauenwahlrecht” (votes for women) is a nice illustration of that. Women kept the country on its feet during the war and in Germany, they have the right to vote from now on. In Belgium, it will take many years before that happens, until after the Second World War. 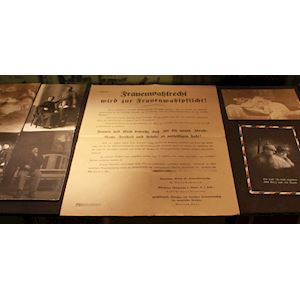