In April 1917 the United States also declare war on Germany. The Germans realize that time is short to end the war to their advantage. In the same year, the battles on the eastern front stop because of the Russian Revolution. As a consequence, thousands of Germans can suddenly be moved to the western front. At the end of March 1918, the German army launches the Spring Offensive with an adjusted tactic. Instead of a massive attack on a broad front, they make small breaches in the enemy's defence lines. The so-called German Storm Troopers operate in small groups and only take the bare necessities with them. The heavy backpack is replaced with a knapsack with some food, a flask, a gas mask and weapons such as a carbine, hand grenades, and an anti-tank weapon or a machine gun, as we can see in this diorama. Thanks to their mobility, they break through enemy lines in many places. But near the ruins of Ypres the German attack is halted, mainly because of a lack of logistics. Many reserves were used up during the Battle of Passchendaele. 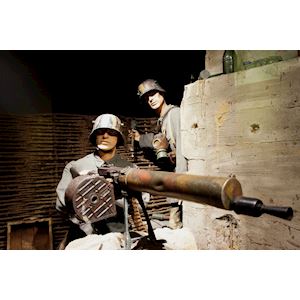