It's the end of 1915 and all is rather peaceful in Flanders. There are occasional clashes at the trenches, but the main battles are fought in France. Most of the soldiers in the Flemish trenches get some breathing space. But the everyday life of a soldier in the trenches goes on. The warfare, aimed at leaving as many wounded as possible, requires a lot of medical attention. The saw in the medical kit immediately attracts our attention and gives us an idea of the atrocities of this war. When a soldier has a serious infection in one of his limbs or is hit by a projectile, amputation is often the only solution. Wearing wet socks can also cause trench foot. Soldiers are therefore required to put on clean, dry socks every day. But the First World War also introduces novelties: for the first time, soldiers are carrying a first aid kit with them. Red-brown tincture of iodine and clean bandages allow the soldiers to disinfect and bandage wounds immediately on themselves or their comrades, something that never happened in war before. In previous wars, every wound, no matter how small, could lead to death by infection. This simple first aid kit has saved many lives. 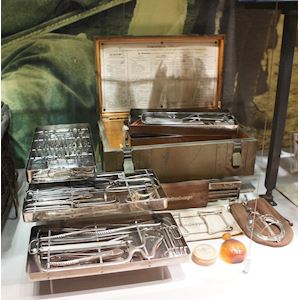