It is 1915 and the front is completely gridlocked. A classic mass attack is no longer effective. New weapons are needed to break the deadlock in the trench war. So behind the front lines, all parties involved in the battle work hard on technological inventions, that should win them the war. The First World War is also the first war in which troops use gas on a large scale. The Second Battle of Ypres starts with the very first poison gas attack. On April 22, 1915, the Germans open 6,000 canisters of chlorine gas. A yellowish green gas cloud slowly rolls over the allied positions and soldiers flee in a panic. But this success is unexpected and the Germans have to contend with poor provisioning and a shortage of reserve troops. The attack stalls after a few kilometres. Quickly after this first gas attack, soldiers are starting to protect themselves against the poisonous substance. A first form of protection is urinating onto a handkerchief, as the urine mostly stops the chlorine gas. Luckily, an adequate protection against gas is quickly being developed. The masks evolve as fast as the gases used in the battles. The best-known gas is mustard gas, which was used frequently for the first time around Ypres in 1917 and is therefore known as "yperite". 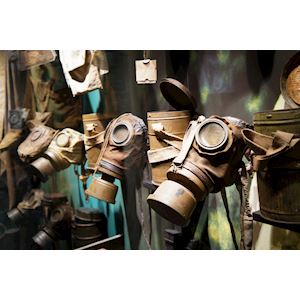