The new method of warfare will cause uniforms to change drastically during the war. But these men wear the outfit the way it was worn when the war started. On the left is a Belgian soldier, in a rather plain and simple uniform. In the centre are two German soldiers. The one on the left is just a soldier, in a rough woollen coat. He is standing next to his superior, a German officer. His outfit is much more refined, his coat is made of soft wool. The Germans also wear a spiked helmet: a leather helmet with a copper spike on top. The spike was meant to protect against sabre attacks. Until the war breaks out, the Brits only have a professional army. That's why they have the most appropriate attire for a trench war. Their khaki uniform appeared in the wars in India in the 19th century, when British soldiers drenched their beige coats in coffee, tea or mud to blend in more with the environment. The second soldier on the right is a Scotsman. On November 10, 1914 the Scottish Black Watch regiment is the only one that holds out south of Zonnebeke. 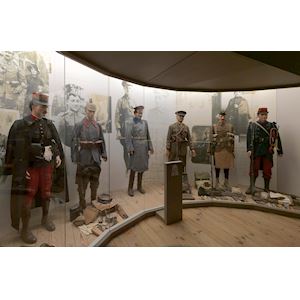