To get a good idea of the world as it was when the First World War broke out in 1914, you need to put yourself in the shoes of the European back then. The last war in the low countries was the battle of Waterloo in 1815, almost a century ago. So war is nothing but a vague concept that Belgians in 1914 only know from old stories. Young soldiers go to the battlefield with their old, superseded image of war. Nobody expects a trench war. For example, this French dragoon on a horseback and his weaponry. Closest at hand is his lance, only later can he pull his sabre, and his rifle is awkwardly far away on his back. Take a look at his uniform too: the design still stems from Napoleon's days. In the 19th century, colourful uniforms were a necessity: the rifles produced a lot of smoke and thanks to the bright colours, soldiers were able to see each other. But in WW1 those bright colours are a huge disadvantage: the French soldiers stick out like a sore thumb. 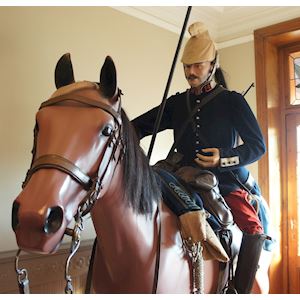